A brief one here – just dabbling in something which many others have walked many miles through – Oldhammer.  Here’s a confession – I can’t remember playing a proper game of warhammer fantasy battles.  Im sure i have once or twice over the last thirty years.  Which is not to say that I don’t own hundreds of painted and unpainted miniatures.
I certainly have supported Games Workshop over the years – buying many starter sets across many editions – in particular when we hit Skull Pass (×3 sets) and then again for Island of Blood (×2).  It was always fun to read and assemble models and both boys find White Dwarf and the storylines compelling.  I used to love reading their detailed battle reports which were so well illustrated.  Magnificent stuff.

Anyway, as we cruise through the Sumner one of the thongs we’ve been kicking around is Dragons Rampant – as we have sizable dark ages armies for Saxons, Vikings, and Irish in hand.  The boys have been thinking about adding a snow troll or two to the mix etc.  You get the idea.

So, after watching a YouTube video from Imperator Vespasian, getting inspired etc, and realizing I would never be able to create my own trolls from Milliput – 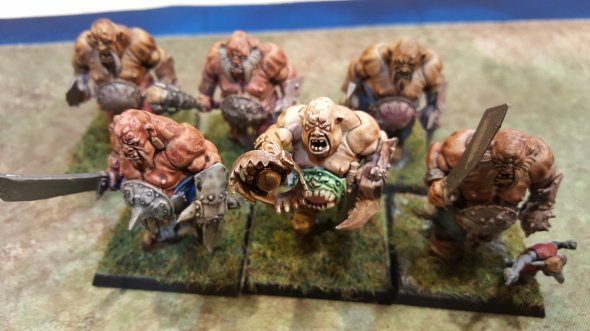 This one is an old Ral Partha metal figure that has been languishing in a box of relics.  My older son is always 100% aware of old figures from years ago and brought this one up to paint.

So that’s what’s been under the brush this weekend – not sure where it will go-  perhaps Oldhammer – perhaps Dragons Rampant only.  Tough to say if we’ll have enough momentum to complete enough units for a game – I have tons of painted 40K stuff, but only  mishmash of WFB units.

One thought on “Oldhammer – baby steps toward a non-nostalgic outcome”