Winter War 2019 was another nice chance to head close to home and meet up with many old friends while running a couple of games.

First up this year was a new game using old soldiers – my 25mm Italo-Ethiopian collection.  The armies have been coming together for a number of years, but two years ago, in an effort to get ready for Cincycon, I painted another 150 Bicorne Miniatures Abyssinian tribesmen.  They have about a dozen poses, and the overall painting/ effect ratio is very favorable.  I haven’t painted a new 25/28mm colonial army in a very long time because I usually resort to my vast 15mm collection for large battles.  Sadly, I’ve even done this Italian army in 15mm – see my Agordat blog for Italians vs Dervish forces at the city of the same name.

This game owes its origins to Last Stand Dan and his blog – with an excellent scenario – Get to the Boats…  The idea is a force of regular troops and askari have put in at al local city on the river to collect up the governor and get him aboard.  At the same time, the warlords are sending their bands into the streets to stop the Italians.

A shot from the dock by the city gate.

Askari and Bersaglieri prepare to enter the cauldron

Here too, another command – this time the Italians are regular infantrymen 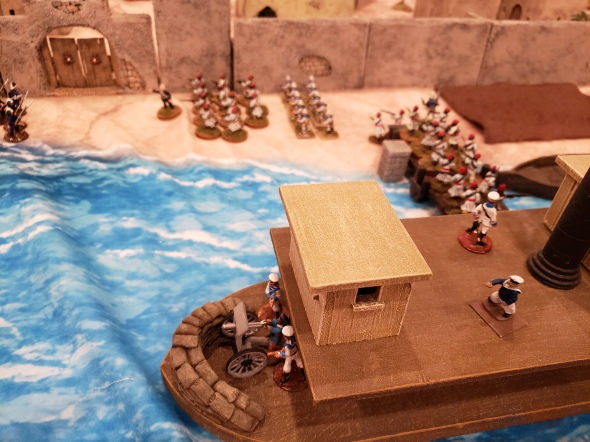 Once the Italians could get back to the gate, the cover fire from the gunboat would assure survival

The governor’s force, the professor, and the flag are just to the left of the sandbags

The game again featured Professor Johnstone, here on-loan to the Italian government on a secret survey.  His survival was one of three VP’s for the Italians – they had to get at least two out of the city. 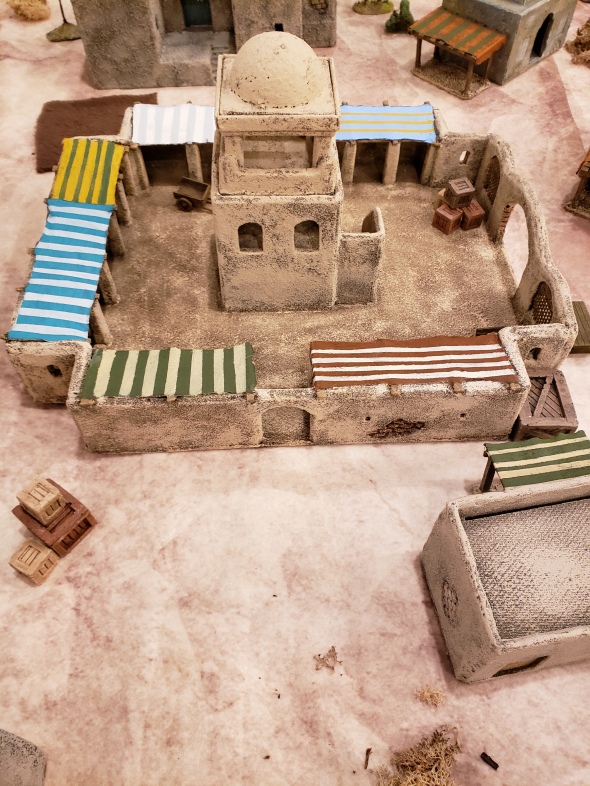 This excellent market arrived only the week before the game – from Smallworldgames on Ebay – brilliant service/ quality/ value. 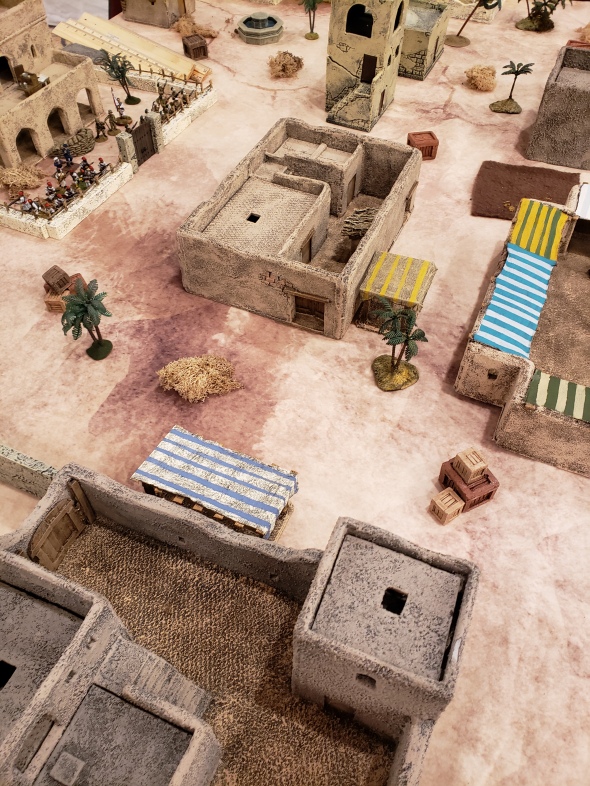 More than 2/3 of the Italian rescuers would spend more than half the game mired here in the gate area before extending a bit toward the governor’s force coming down past the market. 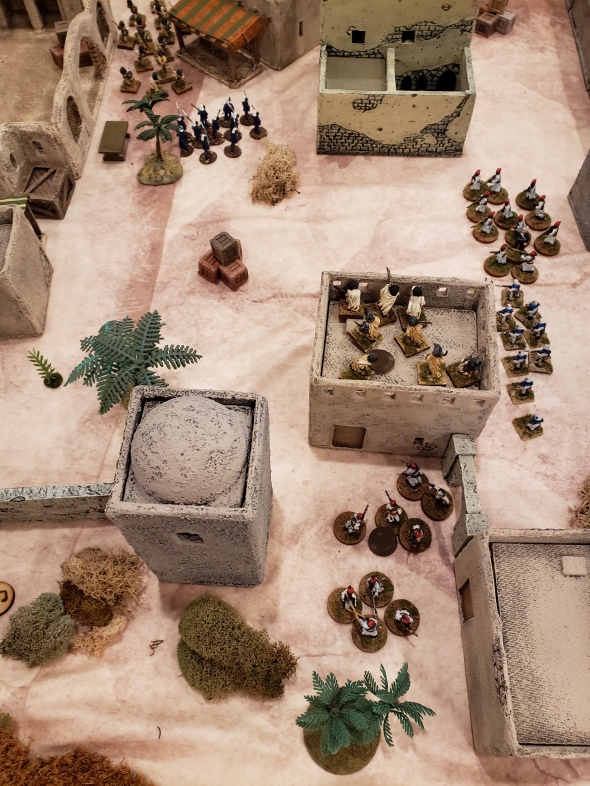 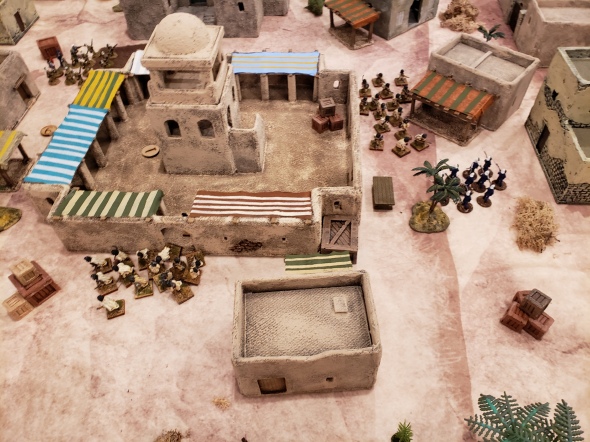 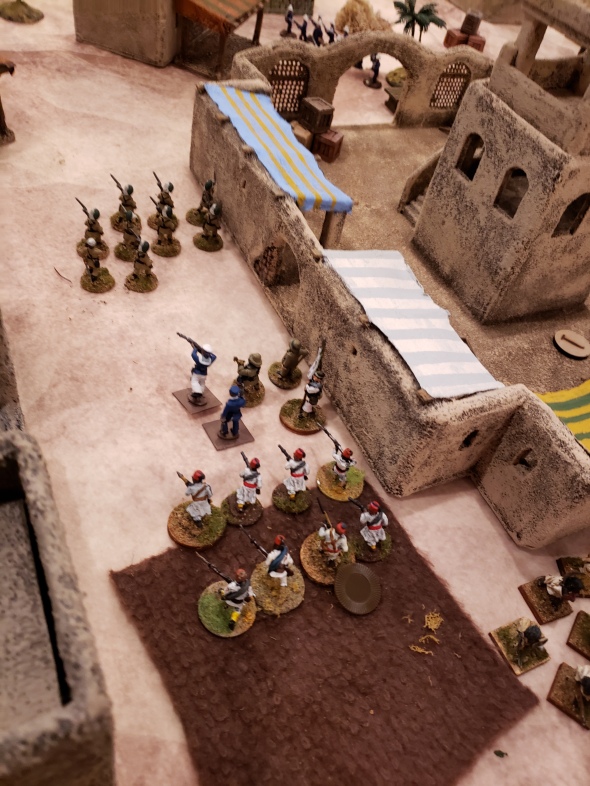 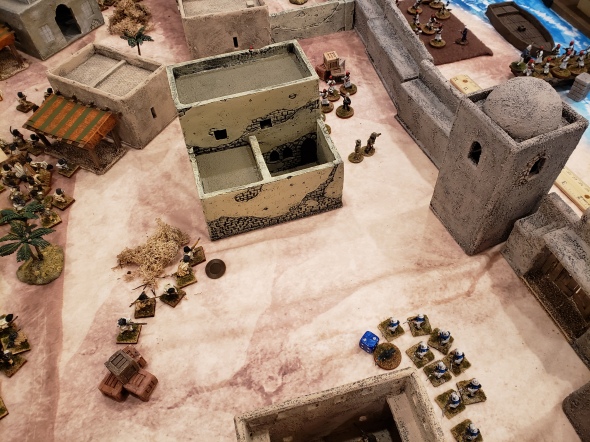 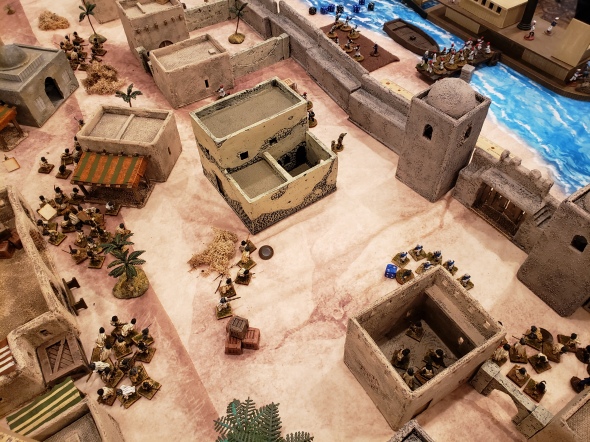 Here at the end the small unit of askari by the gate would be the last men standing as the governor and professor dashed through the gate and toward the rescuing ship.

I tried The Men who would be King rules by Daniel Mersey.  They were mechanically feasible and gave a good game.  Tweaks were applied for city fighting.

I only had a few players, which was sad, as I think this plays best with many players.

Nonetheless it was the first time these Italians have seen the elephant in many years..