Some months ago, I bought a copy of Wargaming the Sugar Islands Campaign by Stuart Insch.  It is a nice, tidy publication which outlines the Martinique and Guadeloupe campaigns from the Seven Years War period – 1759.

I don’t have 28mm SYW collections for the Caribbean – but I do I have multiple 15mm ones for the campaigns in North America and Europe though, and the idea for a home-based game for Black Powder emerged as I have been contemplating what to do with the excellent Caribbean Island game mat from Cigar Box Battles I got with their first  or perhaps second kickstarter some time ago.

Scenario:  French forces on the Islands have consolidated from three islands on the Isle de la forterese in the hopes of holding out until relief may arrive from France.  A British force of some 2 battalions of troops and a half battalion of Scots have arrived off the Isle and are lowering boats.

Were I to take this further, I would add some Caribbean troop types to my collection but I am happy as-is for now, and while much of the actual campaigns featured fewer troops and fit more of a large-skirmish format, I wanted to create a more dramatic sweeping game.  My 15mm SYW regiments are now companies, so pardon the extra figures w/ flags etc.

Rules we’re using are Black Powder 2nd edition.  We’ve been playing/ arguing through  the fourth turn so far.  The speed of landing boats has been fixed at 6″ per move, and when a unit disembarks and forms up it takes a move, and the unit is automatically disordered for the remainder of that turn.  This is the trickiest part of the game adaptation so far.

I should mention that one of t he great features of the game mat are the three breaks in the cliffs with paths to access the upper part of the island off the beaches.  These three breaks then become the focus of both attacker/ defender as the British chose to assault two of three simultaneously, and the French are easily able to use their interior lines to warm the reception at both so to speak – with only a small unit of Chasseurs to guard the third. 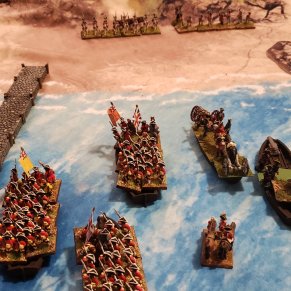 So in the first four turns, the righteous British commander (me) has largely failed to have an impact on the French and militia forces on the high bluffs around the island.  I will add the photos and post this now, and if the game satisfactorily concludes, we’ll add a follow up post…

Two companies and a small battery approach the pier and the west draw – the French player immediately brings more forces to bear….

A view of the eastern beach – where the companies are taking casualties but may actually get to grips with the French next turn.

Stats for the units came from The Last Argument of Kings as well as some additional improvisation for the militia and grenadier units.