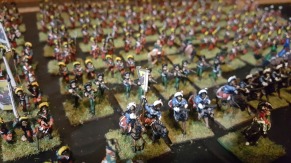 About ten months ago my oldest son began showing me posts on the Polish Uprisings of 1792 and 1794 and said he wanted to game them.  No problem I said, except that I had no idea where to find figures for this really interesting period.

After some research I realized what a great opportunity this was to study and build a few armies which fought huge battles in a period which most of us miniature gamers knew little or nothing about.  I found there was real utility in the idea – Russia fought two wars to suppress the Poles, and also fought sustained campaigns against the Ottomans in the next installment of the wars which had been almost continuous for centuries.  Having a large, mostly unemployed Ottoman army, I decided to jump in.

So a few comments on how to raise your 1790’s Potemkin Russian Army.   To my knowledge there are only two sources of Russian figures – Uprising Miniatures and the more mature line from Falcon Miniatures USA.  Scott at Uprising is a great guy and very responsive to customers – his line is primarily Russian Infantry in the March Attack pose – you can see them on his site or in the fourth rank in the picture above.  His range is expanding each year, and I highly recommend them to everyone.    The Poles in the range are even better – with great diversity in the Militia figures.

Falcon Miniatures 15mm line is a must-have but much harder to get to.  Kai at Falcon is a very nice guy but not fully focused on hobby/ production, so I recommend connecting with him first and discussing it.  His enthusiasm for this period is tremendous, and when he did cast for me, he was extremely helpful in sourcing command figures, casting in specific unit sizes etc.  He was great.

The Falcon line includes great Russians in advancing, march attack, and firing poses.  I like the advancing pose the best, and ranks of them with flags flying are really imposing. The pictures of the age really bring it across…  For Jaeger regiments of the period, I stole an idea from Eric B and took firing poses and removed bayonets.  You can see them behind the cavalry in the picture above – they look great in their dark green jackets and trousers.

Here’s a long time reference for uniforms which I can’t properly credit:

The bulk of Russian cavalry in most battles in 1794 were cossacks, but the regular regiments were the most reliable cavalry, and many of their uniforms above.  The Green/ Red combinations are Dragoons (and some pioneer units)  The white are the cuirassier, and the light blue uniform was Chevaux-leger.  The Hussars include the yellow and black uniforms at the lower right (I think).

I hope you find this a little inspiring.  Eric B’s site Din of Battle is full of great pics of his collection in battle against both Poles and Ottomans – very inspiring all around – take a look at his site if you haven’t already.  Great stuff! 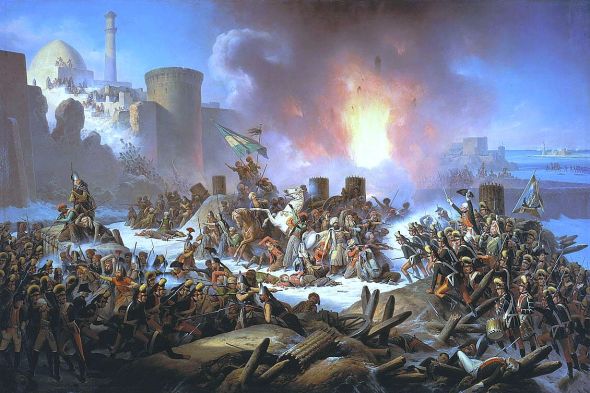